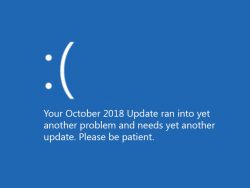 Microsoft released the Windows 10 October 2018 Update on October 2, then pulled it days later. Now, with November fast approaching, the update has still not been re-released. Where’s the problem? And will it happen again? In September 2017, Microsoft boasted that it had just released the “best version of Windows 10 ever.” A year later, as Windows engineers struggle with the most recent release of the company’s flagship operating system, there’s a compelling case that the […]